The heart of the traditional crime novel and the traditional locked room mystery is wonderfully, and essentially a morality tale. A tale of good and bad, with justice prevailing at the denouement. This is a deeply satisfying and important type of storytelling, and appeals to our humanity. But many modern crime works are not traditional ‘whodunits’ but ‘whydunits’ with the dark motivation of the killer being the centre of the story. Is the apparent lack of interest in the golden age locked room mystery, something to do with the time period that we find ourselves in?

Otto Penzler is an editor of many crime collections, including the huge anthology of short stories ‘The Locked Room Mysteries’, published by Black Lizard in 2014, and is also the proprietor of the Mystery Bookshop in New York. In writing for the Independent about the seeming disappearance of the traditional Locked Room genre Penzler puts it like this:

‘Many modern readers don’t have the patience to follow the trail of clues in a detective story in which all suspects are interviewed… until all the suspects are gathered for the explanation of how the crime was committed, who perpetrated it and why they did it. It is not realistic and was never intended to be. It is entertainment, as all fiction is… or should be.’

If Penzler is right, the ‘Impossible Crime’ is the genre of crime fiction which you could say requires the most patience of all. Could I see in my own city of London, a commuter sardined in high-paced commute trying to piece together the clues to work out how a man was shot in an empty room, with the only entrance watched, to then have the still smoking gun delivered in a package only minutes later?… (Joseph Commings’ X-Street Murders if you’re interested) Maybe not… But then again, maybe I could.

There have been a number of modern Locked Room mysteries twisting their way into our minds in recent years. The BBC series Death in Paradise, originally penned by Robert Thorogood, has had 4 impossible problems. One of my favourites being the last episode of the most recent series 5 (as I write this) titled ‘Flames of Love’. This episode, written by Matthew Barry, puzzles on a victim shot in a room where the window is locked from within and her body is propped up against the inside of the door leaving no way for a killer to get out. Mark Gattis’ modern Sherlock series has contained a few impossible situations, notably where one victim was stabbed while inside a locked shower cubicle, with no weapon or assassin to be found. And casting our mind back a few years you could have seen an impossible crime every week with David Renwick’s Jonathan Creek series. There is a new 90 minute Creek episode on the way, so there is more to come from Renwick. (Check my last post for more details – I am a big Creek fan!) 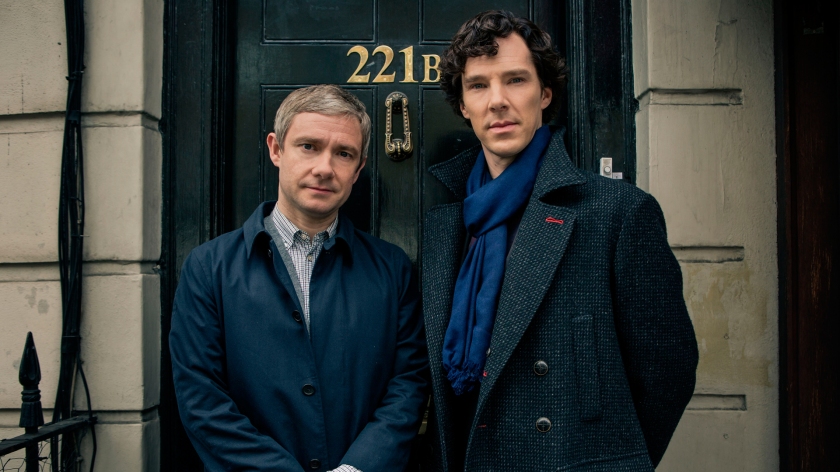 But with the exception of Creek many locked room stories today are still few and far between, usually used as openers or punctuation points to a series, and are mostly in the TV format. Comedian Miles Jupp wrote an article for the BBC saying that locked rooms still had a strong appeal, but had his doubts as to whether they could make a resurgence in the world of paper and print:

The question here is, why? What is holding the impossible crime novel back (other than maybe the time needed to read one) and why would a publisher not see it as a viable investment? Well in many ways, why should they? The form itself could be seen as somewhat of an outdated one.

The height of the locked room mystery came during the reign of the classic fair-play detective novel, known as the Golden Age of detection (or GAD for crime buffs). Think Agatha Christie, Dorothy L Sayers, G.K Chesterton, John Dickson Carr, all between the two world wars. These writers and many others formulated the classic ‘whodunit’ style of puzzle fiction, with plotting, clueing, misdirection and sometimes pages with a ‘challenge to the reader’ to work it all out before the detective does. The addition of the locked room, then, made these books not just a whodunnit but a ‘howdunit’, taking the puzzle element to it’s highest point.

Much popular modern crime writing does not fall easily into either of these two categories. We could call many contemporary crime stories a ‘why-dunnit’. We can find out who the killer is on the first page, sometimes the book or TV series is from the point of view of the killer themselves. What is important is why they did it, their psychology. The more brutal, thrilling and serial the murders are, and the more twisted the killer’s motives, the better. Even if their motive is that they simply just like killing (maybe the darkest motive of all).

So then, the modern psychological thriller (fast paced, gritty, psychological) and the Golden Age locked room mystery (social, contained, complex and moody) could seem like worlds apart. But essentially, as ‘crime fiction’, there are a number of things that still link these time periods together. For the purpose of this post I will discuss just one: morality.

In our current pluralistic culture, ideas about morality and justice are (importantly) being called into question and are therefore more difficult to grasp onto. It’s not a wonder then that so much of popular crime fiction deals more with the motives behind the killer in question. For example, if someone is simply psychotic, how do we understand what they have done? Or if murdering someone seems almost essential in the narrative situation, then how do we and the other characters relate to the perpetrator, as in the brilliant inverted crime thriller The Devotion Of Suspect X by Keigo Higashino. In this novel a horrible, abusive ex-husband re-appears tormenting his ex-wife and daughter, consequently being murdered in self defence, all of which we see. The enduring grip of the narrative is then about how to cover the crime up, because surely the wife and daughter are really innocent in these confused circumstances?

The thrill of many modern popular crime books comes in what lies behind the killer or what ties the killings together, the reader trying to psychoanalyse and unpick the brain of the murderer, and in that way it’s an interesting reflection on our own time period. To think that in a epoch where we are statistically safer than ever, but at the same time all the ills of the world are so easily available to watch at the click of a trackpad, we should land on such a gritty form of popular storytelling is striking. Although if you read Endless Night by Agatha Christie (not too late at night) or Margery Allingham’s stories you will see something of the horrific psychotic killer and the most brutal and gory of murders even within the golden age of detection…

But above all this, as we read a crime novel or watch a crime series we still have that same impulse that drives the whole crime genre: simply wanting to work it out. Even if modern crime works are less about means and opportunity in favour of motivation, our propensity as humans to get to the truth and to see justice prevail is not extinguished. And therefore the essence and the very beginnings of the crime novel, as both morality tale combined with puzzle, still remains at its heart. Even if the puzzle is less about how killers can escape from locked rooms, and more about how the murderer’s brain locks together.

However, in saying all this I want to acknowledge some generalisations on my part. There are many writers today still working in and around the golden age style. Take for example Sophie Hannah, and the TV series’ Miss Fisher’s Murder Mysteries, Dr Blake Mysteries and Death In Paradise. There are also many modern thriller’s with fair play elements, like Michael Dibdin’s Aurelio Zen series, the as mentioned Higashino novels and the American Sherlock TV series Elementary to name a few examples in a big list. But much of the books that make it into big posters on the platforms of train stations, are of the fast paced, often inverted, psychological crime thriller.

In regards to the title of this post where all the locked rooms? it could seem that the psychological thriller genre has all but taken over the golden age locked room format. But… there is indeed a contemporary locked room novel scene bubbling, and it may surprise you to hear that to access it, we need to look to Europe and the far east.

In 2007 the noted locked room anthologist Roland Larcombe brought a group of crime fiction experts and translators together to create a hypothetical library of the top 100 locked room mystery novels. In the final results a huge 40 percent of the books chosen were French titles. The full list can be found here. Arguably the first Locked Room Mystery proper the fantastic The Mystery of The Yellow Room was written by french author Gaston Leroux, who then went on to pen The Phantom of the Opera. Continuing from there is the legacy of Pierre Boileau and Thomas Narcejac. In their own right they both wrote many famous locked room novels, which appear on the top 100 list by Larcombe. And together under the nom de plume Boileau-Narcejac they wrote, among many other works, the noir classic Vertigo, adapted by them for cinema at the request of Alfred Hitchcock. Interestingly, these works by Boileau-Narcejac alongside other french authors like George Simenon could also be said to have been the start of the ‘whydunnit’ genre, where the killers and criminals are more interesting than the detectives. Other writers such as the hyper prolific Paul Halter, who has written some 40 Locked room mysteries in French, continue to carry the impossible crime mantle right up to the present day.

And to search further afield in Japan, the classic detective novel and the locked room mystery are absolutely thriving. Take for example the wonderfully complex and brutal Tokyo Zodiac Murders by Soji Shimada where an artist is killed by an unknown weapon within his studio, locked from the inside. His 6 daughters then all go mysteriously missing from a bath house, their body parts found scattered all over Japan, set out by a riddled code.

But the problem here is, barely any French or Japanese locked room novels get a translation into English. This could leave English readers thinking that the locked room book is all but dead, when in many cases it is most definitely alive! So, maybe the locked room mystery genre hasn’t vanished as much as we might think, and every time one makes it’s way into the UK many seem to love it. Who knows, maybe we will see a resurgence in the world of books. But they may have to be translated from Japanese or French first!