The hard hitting detective Judge Dee has been called the Sherlock homes of China. But interestingly, the T’ang Dynasty mystery stories of Judge Dee were penned by a Dutchman. 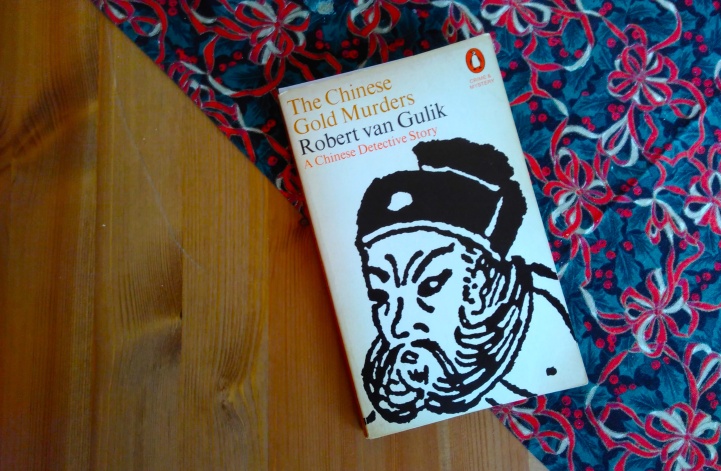 On my last second hand book walk through London (see here for the guide) I was very fortunate to come across a copy of The Chinese Gold Murders by Robert van Gulik. A locked room mystery set in 7th century China, following the exploits of Judge Dee and his first cases as the new magistrate of the fictional Chinese city of Peng-Lai. After the second world war broke out the author, Robert van Gulik, lived in China as a representative of the Dutch government. Here he became an expert on Chinese translation, art, literature and culture. While in Japan before the war he came across the book ‘Dee Goong An’ (The Cases of Judge Dee) in a second hand book shop. The book, written in the 18th century by an unknown author, was an early piece of Chinese detective fiction based on De Renjie, a real life country magistrate who lived roughly between 630-700 AD. van Gulik was so taken with the anonymous book that he decided to translate it into English, and after it’s publication he went on to pen his own series of Judge Dee mysteries. The Chinese Gold Murders being his fourth Judge Dee novel written in 1952.

To begin, I have never read a crime novel with so many crimes! Judge Dee comes up against an impossible poisoning, the victim’s ghost now seeming to be haunting the corridors of the tribunal, a woman who vanishes from a muddy pathway, a man beaten to death and thrown into a river, two victims stabbed to death in their beds one of which consequently disappears after being buried, a prowling weretiger mauling victims in the woods, smuggling of arms and a headless monk. And that’s all on his first two days on the job!

However, van Gulik neatly weaves this all into three distinct cases each solved in order through the book. This rule of three, van Gulik writes in his postscript, follows that of the traditional Chinese detective novel where the sleuth would solve three or more cases in succession.

There are so many threads and clues going I was worried that van Gulik wouldn’t manage to keep the plot afloat, but he ties things together throughout. There are some lovely riddle and enigma like clues which reveal themselves convincingly at the books close. A particularly nice scene is where Judge Dee is dragged along to a Chinese melodramatic street performance of a number of traditional mystery plays. The last two stories of the play, showing the cases of another ancient master detective ‘Judge Yu’, show how a murderer is revealed by the clue of a secret message being hidden in an almond shell. However, it’s not the secret message that is the real clue, but the almond itself, as the real murderer liked almond milk. This is obviously preposterous, and is hammed up to great effect in the farcical street play, but the idea of ‘not the thing inside the but the thing itself’ then links to a very real clue happening in one of Judge Dee’s complicated cases. This and other inside-out ways of looking at things are very satisfying elements throughout.

As a historian of Chinese culture, van Gulik is faithful to the historical setting, and the book reads as much like a historical diary as well as a crime novel. Set during the development between opposing Confucian and Buddhist worldviews this tension becomes a backdrop to many of the cases. Also taken as running subplots are the high level of patriarchy evident in the culture of the time, alongside the ethics of sex and gender. The buying and selling of wives and prostitutes is all shown, and sexist remarks abound, which Judge Dee smashes down or subverts. van Gulik also illustrated the novel himself, with 10 line drawings completed to mimic the traditional Chinese print style.

As well as the difficult sexist characters, I did find the book was too slow paced in places. The book begins at high speed but there is some drudgery and dryness in the middle when getting through the more technical aspects of historical exposition and case details, particularly after the impossible poisoning was resolved about half way through. Though the pace picks up again towards the end and the final reveal scene in a huge temple meeting is worth getting to.

To focus on the impossible situation itself for a moment, as this blog is designed to, the poisoning had a convincing and well plotted set up. The original magistrate of Peng-Lai is poisoned in his library locked from the inside. Poison is found in his teacup but all of his tea making equipment is kept in a locked cupboard which only he has access to, and no one was seen entering or leaving the building at the time. I felt that the mechanics of the solution were a little unconvincing, and I’m not sure if it would actually work. Two semi-alternative solutions were produced through the book, one which included the slamming of a door, which I actually would have preferred as the solution. But this ends up being a recurring motif which becomes more and more important and creepy and it makes sense that it therefore only pointed to the final solution. Interestingly, van Gulik writes in his postscript that the idea for the impossible poisoning, of which he modified, was based on a much older story from the original anonymous ‘Dee Goong An’ stories, the motif for which is very reminiscent of a Sherlock novel, even though the Sherlock story was written 100 years later.

What also warmed me to this book were the unresolved paranormal elements that van Gulik chose to leave us with. He doesn’t give us any doubts that the crimes were explainable, but that Judge Dee may in the end have had some ghostly help along the way. That refreshing element gave it the little edge that it needed to round off. Looking forward to finding more of this series and trying them out.