The date, 1943. The author, Carter Dickson. The story, a classically macabre and unique mystery from the master of the impossible crime. 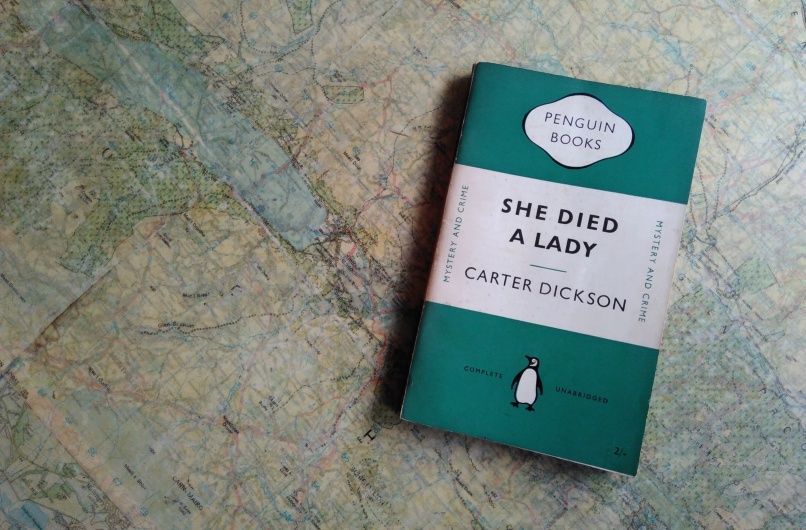 The singular Rita Wainwright has found herself tangled in an love affair with young american actor Barry Sullivan. Not being able to take the secrecy of hiding it from her husband, and knowing that they could never be together, the pair decide to make a suicide pact, and throw themselves from the top of the 70 foot cliff at the end of her garden, fitting called Lover’s Leap. The scene is thoroughly examined and only two sets of footprints are left in the damp earth that leads to the edge. But when their bodied wash up it turns out they did not die from falling 70 feet onto a bed of rocks, but were both shot in the chest at close range. The gun that they were shot with is found, and it is impossible that either of them fired it themselves.

Golden Age writer John Dickson Carr, and under his pseudonym Carter Dickson, wrote over 70 novels, almost all of which are impossible crimes or have impossible elements. She Died A Lady was his 17th novel under the Carter Dickson banner, featuring his Dickson series detective, the hilarious Sir Henry Merrivale.

Carr was on top form with his scene descriptions and use of prose here. Lines like: ‘The sky was lead-coloured; the water dark blue; the headlands, at bare patches in their green, like the colours of a child’s modelling-clay run together’, set atmospheres that linger long after the page they appear on. Equally, the characters were quickly and powerfully established, described as to be implanted in your head. All unique without feeling parodied or unnatural, with a sharp dose of humour thrown in.

The real strength of this book though, is the plotting. It’s an absolute roller coaster when it comes to directions and threads being weaved together. For example, about half the way in, just when you think you know what is happening a secret is revealed which is so absurd and shocking it knocks you sideways. After Carr let’s the shock settle in, he shows you how it seamlessly links to everything you have seen so far. To finish, he drops the killer and the solution in a high paced denouement, which leaves you needing a to take a day off.

The solution to the impossibility as with all Carr’s best works, is devilishly simple. Though, for me, there were a few too many theoretical mechanics involved, and it was related to specific things from the time period that you may not be totally familiar with. However there was one simple idea, clued so well in a throw away line (which was so obvious on reflection), that left me smacking my forehead for weeks.  I can see why this book is as well respected as it is.

I had heard about Carr’s poor handling of women characters on occasion, but was yet to experience it. Having recently read the amazing ‘Till Death Do Us Part’, and reflecting on other classics like ‘The Judas Window’, where his women are some of the strongest, plot moving and developed characters, it was difficult to find this less well handled. There are only so many times I can hear the narrator describe the body, face or lip shape of every woman. Although on reflection I am starting to wonder if it was the narrator’s view of these females that we are being thrust into, as his descriptions are consistent with his character as a kind of bumbling, slightly out of touch older male? I was almost coping with that, but then this line dropped as if from nowhere: ‘Though it is dangerous to make generalities, this was far from being the first time in my life when I have observed the absolute incapacity of any woman for telling the truth when truth becomes unsuitable. There is no intent to do wrong in this. To the female sex, it simply does not matter. Truth is relative; truth is fluid; truth is something to be measured according to emotional needs, like Adolf Hitler’s.’

Unless I have deeply misunderstood this line (I have read it over and over) this was simply too much for me, and left a sour taste, even accounting for the time of writing. It seemed to be totally incongruous, and written without enough irony, even if it was a character attribute or parody of the narrator himself. I’m not sure, and would like to hear some thoughts from readers on this. It is (although weirdly shocking) a small moment, and as the brilliant feminist, media critic Anita Sarkeesian always says, it is possible to still enjoy a cultural work while being critical of certain elements of it.

A final thought about this, there was also some interesting gender reflections when Rita Wainwright is maliciously called a ‘theatrical’ woman by certain characters and therefore not taken seriously, her name being dragged through the mud. This idea becomes subverted as the narrative goes on, and people are shown up for judging a book by its cover. Speaking of which the title is really brilliant, and when revealed in the book it’s a real shocker, relating to these ‘theatrical’ reflections and subversions.

My conclusion, grab and read this book. For the plotting, for the feeling of the mystery rippling throughout, the clues that niggle at the back of your head and the tensions coming left right and centre. But as for the difficulties, the reader is warned.

I am submitting this review as part of the Crimes of The Century series by Rich over at Past Offences, this month in celebration of classic detective fiction published in 1943 .