Sometimes I come across a book so curious I have to pick it up. Ellery Queen’s Book of Mystery Stories is just that book. Its very existence is so fascinating I had to write about it. 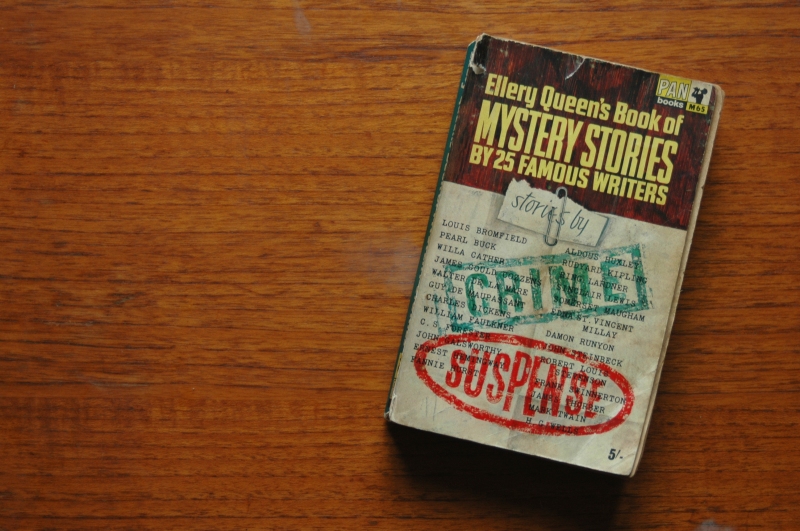 Most followers of this blog will know who Ellery Queen is, but if not let me introduce you. Ellery Queen was the moniker of crime fiction writers, editors and anthologists Frederic Dannay and Manfred Bennington Lee. They wrote some 30 novels and short story collections featuring their main character, also named Ellery Queen, a writer and amateur detective who helps his police inspector father solve complex cases. They also had a huge impact on editing and anthologising crime.

This anthology originally published in 1952 under the title ‘The Literature of Crime’ seeks to show, in Queen’s words, that ‘few people realise – few critics, too – that nearly every world-famous author, throughout the entire history of literature has tried his hand at writing the detective or crime story’.

And the list of names in this book is extraordinary. Queen brings together short crime stories from none other than Mark Twain, Ernest Hemingway, Rudyard Kipling, Aldous Huxley, Pearl S. Buck, Walter de la Mare, Charles Dickens, John Steinbeck and Fannie Hurst to name but a few.

What made me pick it up, was the foreword by Queen, in which there are some fascinating facts. For example in discussing Mark Twain Queen says ‘Twain’s writings in the detective-crime field are almost wholly unappreciated’ explaining that Twain wrote over 6 detective stories through his career, and that he was ‘the first writer in history to see the plot possibilities of fingerprints… Yes, both in the short story and the novel… as a means of criminal identification.’ And in Huckleberry Finn, often ranked as one of the top 100 books of all time, Twain wrote in the lady detective Mrs Judith Loftus, who uses the gender norms of the time as to uncovering Finn’s disguise.

And most fascinatingly: ‘did you know what was book Mark Twain was writing at the time of his death? A mystery novel, entitled Jim Wheeler, Detective.’ Truly wonderful stuff. The unfinished Jim Wheeler manuscript is housed in the New York Public library having never been published, but I guess it would be a frustrating read having no ending.
What I find interesting about this collection is that it shows the complexities of the crime form were not snubbed by some of the world’s most famous authors.