There has been some great stuff in the bloggersphere the past few weeks. After reading the incisive review by JJ of one Ellery Queen’s problematic locked rooms The Chinese Orange Mystery and the brilliant deconstruction of SS Van Dine’s Twenty Rules for Writing Detective Stories by Noah, they got me thinking: do locked room mysteries need  a different set of ‘rules’ than the average golden age detective story? Are there narrative tools that need to be applied to make a locked room mystery story really work? 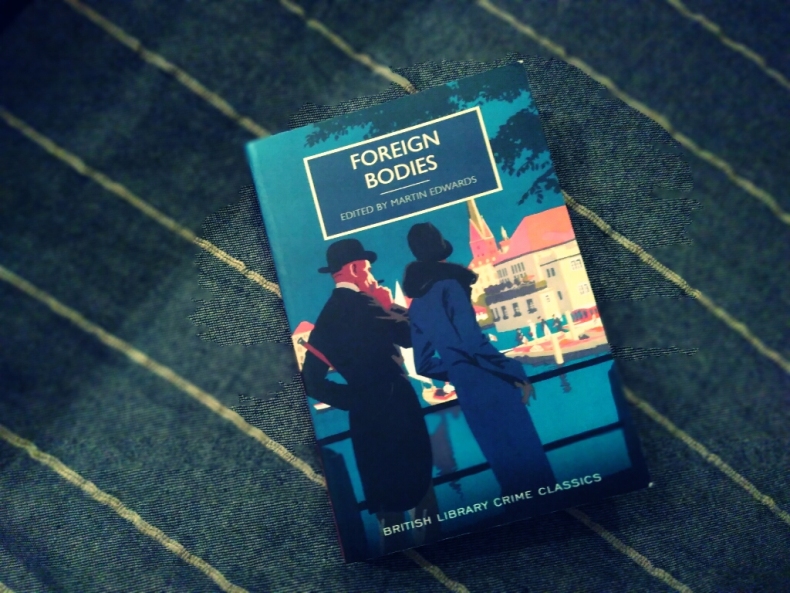 This has set me on the slightly gargantuan task of beginning to create a my own ‘decalogue’ for locked room mysteries. The decalogue I of course reference here is that created by Ronald Knox in 1929. Father Ronald Knox, writer of some wonderful mystery novels and short stories of the Golden age, came up with a set of 10 rules (or a decalogue) for writing detective stories. This famed list was very much tongue in cheek, but was a challenge to the writers of his generation to write better, and has lasted the test of time. You can see the list here at Thrilling Detective. But rather than diving straight in to try and create a possible ‘ten rules for writing locked room mysteries’ (a rather presumptuous task in many ways), I want to begin wrestling with some ideas, with suggestions from you lot, and this post aims to start that.

The other thing that got me thinking about all this was recently completing Foreign Bodies, an anthology of international detective stories, brought together by golden age aficionado Martin Edwards, and published as part of the British Library Crime Classics collection. Foreign Bodies contains a number of locked room shorts, which touch on different aspects of what makes a locked room mystery work (or not work as the case may be). I’ll use these selected impossible crimes from Foreign Bodies to draw out some ideas about what I think makes a great locked room mystery, on the way towards creating some kind of decalogue of my own in the near future.

Wow!! With that massive introduction/caveat over lets dive into it.

I have been talking about this a lot lately and mainly because I have been disappointed by the lack of this in so many modern and golden age locked room mysteries. Too often I have seen impossible crimes used as a crude tack on; or that the author seems to have created a nice idea for a problem, but then created a terrible story around it just to facilitate the idea. Ellery Queen’s The King Is Dead (which I have just dragged myself through) is a perfect example of that. I think this rule goes for the solution as well. When an author creates a world in which the impossible crime can naturally emerge, or fit in with the narrative, it’s a wonderful moment, which drives the power of the impossibility. And although you are providing a rational ending to your impossibility, if it can relate to the context at hand, and fit in with world created then it’s a total winner

In Venom of the Tarantula, a sweetly composed Indian impossible crime short, the aged, sickly and foul-mouthed Nandadulalbabu, bed bound and surrounded by a constant stream of witnesses, now dedicated t the process of writing poor erotic fiction, is some how able to ingest ‘spider juice’, a deadly poison that in small amounts gives the addict a rush of nervous energy. His doctor doesn’t know how he gets his hands on it, as everything and everyone that goes in and out of the room are watched. Nandadulalbabu challenges the doctor and his family to find out how he does it. This situation could sound absolutely ridiculous, but here is where my point comes in: Bandyopadhyay sets up the scene and characters in a way that means that it feels like this is exactly the kind of thing that would happen, and it’s also exactly the kind of way those people would act, therefore naturally creating this impossible scenario.

2 – Be creative with the set up, clewing and denouement, especially if the locked room is technical.
(The Stage Box Murder by Paul Rosenhayn)

As many locked room mysteries can be (sometimes necessarily) complex, and in particular need of a strong mental image (and a map in some cases), if one can use unique and exciting methods of delivering the information this strengthens an impossibility no end. In The Stage Box Murder, both the set up and denouement are pretty involved – a man is stabbed in a locked and watched theatre box – but the whole narrative is delivered as two people writing letters to one another. This style allows Rosenhayn to deliver what could be clunky exposition with a natural edge as (again with point one) it’s flowing as it would, naturally, in that type of letter writing and in that context.

These kind of clever and creative tools don’t have to just be used with the overall format  (and can be used very badly – I’m looking at you again The King is Dead) but can be used in plotting, clewing, character and motive also. For example clues can be laced within scene description and the atmosphere of the mystery (as Carr does so beautifully) which then has the amazing meta-effect of both charging and developing the world of the book, while also pointing at the solution and the motivation for the impossibility.

3 – Taking clues and making them maddening, by making them oblique.
(The Cold Nights Clearing by Keikichi Osaka)

Maddening clues, like why someone took 30 minutes to complete there routine journey home rather than 15 (just to pluck an example from Foreign Bodies at random) are of course vital to all types of golden age detective fiction. But the maddening clue in a locked room is super important to the building of atmosphere and mystery because it’s a how-done-it. We are not just trying to decode a clue to work out who the killer is or their motive, but also to find out how on earth they achieved it. So then, when the clue is made heavily oblique, and by that I mean so seemingly left field and unrelated to the problem at hand (a low wattage lightbulb in the wrong packet, why a £5 note is ripped in a certain place, and why someone would fire a blank gun into a wall – just to again pick a few favourites at random from some of the best locked rooms mysteries ever), it adds to the maddening world that is already being created by the impossible crime. If used well, and linked both to the impossibility and the character of the killer (a real challenge), it makes the solution all the more delicious.

In The Cold Nights Clearing the wonderfully obscure clue of why a the lid from a cardboard box is wet (in an otherwise dry and warm room), is one key to a vanishing killer.

4 – Totally subverting the idea of a locked room itself as a way to create an original problem.
(The Mystery of the Green Room by Pierre Véry)

Sometimes you come across a story with such a clever and brilliantly executed idea it makes you laugh. Véry here takes the whole idea of a classic locked room, as provided by The Mystery of the Yellow Room by Gaston Leroux, and turns it on its head. In The Green Room, a thief has every opportunity to go into a room and steal priceless items, that they knew about in advance, but they don’t take it. There were no doors watched, locked or otherwise, and no blocks to the room, but the burglar didn’t go in. Why? The detective of Véry’s story then calls the whole thing an ‘open-room mystery’, and the whole story runs in total parallel, right down to the villain, to the The Mystery of the Yellow Room. If you haven’t read Yellow Room, don’t read this first! It totally spoils everything! But this story is a little masterpiece so read Yellow Room so you can get to this, and vice-versa.

5 – The reason for why the crime is impossible, must be as satisfying as the solution to how it was done.

I don’t have a story to reference for this one, but I couldn’t leave it at 4, not rounded up, I’m not some kind of mad man. This rule I think can be the making or breaking of an great locked room mystery. Many times have I come to a great impossible problem that in the end is so flimsy on the reason to why it exists that it serves to totally negate the power of the impossibility.

The recent episodes of Death In Paradise series 7 (oh how the mighty fallen!) are perfect examples of this going terribly wrong. Impossible problems are used to create a ‘hook’ at the outset, but then by the denouement are deemed to be totally unnecessary. By that I mean, that the killer is going to incredible lengths to pull of an impossible poisoning or a faked suicide attempt (to choose the first two episodes of DIP as an example) when they could have just shot or stabbed them on the beach, or poisoned their drink or food at anytime. With this rule ignored the impossibilities become the equivalent of click bait, used to create an interesting starting point, but actually have no bearing on the motive, and the reason why it all happened. We are then just expected to believe as the audience that someone would go to ludicrous lengths for absolutely no reason apart from the writer trying to show off some clever idea they came up with.

So where would you start with your rules for the perfect locked room mystery? Do you agree with these ones?