John Dickson Carr’s first novel is like a perfectly drawn map of everything he would go on to achieve and master in his career as an author of astounding detective fiction.

In It Walks By Night (1930) we have the beginning of all things ‘Carrian’. The rich and velvety use of prose to describe character and scene, the grasp on setting and the creation of atmosphere that with a few words stays in your head a life time, confused psychologies and motives, double clues, fiercely well written and leading female characters (and the beginning of what would become a staple for Carr – the oppressed or wrongly convicted woman), endless macabre and of course the head spinning impossibilities of an original and water tight locked room mystery.

The story: On the eve of their wedding day Madame Louise and her new husband the Duc de Saligny are spending their first night together at a Parisian gambling house, but they are not alone. Half the Parisian police force is guarding the building at threat of ‘Laurent’, Louise’s psychopathic ex-husband, who has recently broken out of prison and has sent a message explaining that if they go through with the marriage he will kill the both of them. Laurent is a master of disguise and seemingly able to enter and leave rooms at will. But of course head of the police force Henri Bencolin is there, so nothing can go wrong…

During the night at the gambling hall, the Duc de Saligny walks into the empty card room and closes the door behind him with both entrances watched. But when a waiter responds to a bell for a drinks order rung from the room, he opens the door to find Saligny beheaded, and a bloodied sword hanging on the wall, but the rest of the room is empty and there is no sign of Laurent.

The main thing to say straight off the bat is that this was Carr’s first book, HIS FIRST BOOK! The amount of depth, challenge, character, misdirection, impossibility and woven plot is absurd for a first crack at a detective novel.  There are many great reviews of this book out there, most of them you can find on fellow Carr fan The Green Capsule’s ever growing review list, where he is collecting Carr reviews from across the blogging community. So if you want some more opinion on the book and it’s pros and cons, go and check those out.

I want to take things in a different direction by looking at Carr’s relationship to Edgar Allan Poe, and how this book I think acts as a homage to the great American writer of the macabre.  And I’ll start by explaining the title of this post.

If you have read many of Poe’s short stories you may have come across the The Cask of Amontillado (1846). It’s one of Poe’s best and most chilling tales, which opens with these shuddering lines:

‘The thousand injuries of Fortunato I had borne as I best could, but when he ventured upon insult I vowed revenge. You, who so well know the nature of my soul, will not suppose however, that I gave utterance to a threat. At length I would be avenged; this was a point definitely settled – but the very definitiveness with which is was resolved precluded the idea of risk. I must not only punish but punish with impunity. A wrong is unredressed when retribution overtakes the redresser. It is equally unredressed when the avenger fails to make himself felt as such to him who has done the wrong.’

Our narrator does indeed take his revenge when he leads Fortunato, a passionate wine expert, deep into an underground cellar with the promise of a rare casket of Amontillado, which he asks him to check is the genuine article. He appeals to Fortunato’s pride by telling him that another wine connoisseur, whom Fortunato believes to be a fool, has said it is the real deal. Fortunato then meets his horrible end (although you are never quite sure) deep in the caverns of the cellar, with a haunting trowel in the hand of our narrator.

So, now to the links between the two. The charged atmosphere in the chilling opening chapters of It Walks By Night, with the possibility of Laurent lurking round every corner, has one particularly horrific moment when Laurent appears in a locked bathroom, a smile hanging on his face, and then vanishes without a trace dropping a metal object onto the bathroom tiles. The object is found to be a metal trowel, as with the killer in Amontillado. There is also the presence of an underground wine cellar from which Carr builds a crucial and chilling plot point in his mystery.

There is not just similarity here in the placement of key objects from Amontillado, but in their meaning. The trowel in the hand of the killer in Poe’s story is the instrument and symbol of revenge acted out, of confidence tricks and pride played out against the victim. This symbol works exactly the same when Laurent drops the trowel at the feet of his ex-wife in It Walks By Night, as he seeks revenge for the betrayal of their marriage. His pride will not let it go, and he will trick Louise and the Duc De Saligney into his trap. Alongside this,  a reference to Poe and the trowel  is actually made by one of the main characters in chapter 8 entitled ‘We Talked Of Poe’.

Furthermore, if we drift back to the opening lines of Amontillado:

In many ways this quote represents the solution to It Walks By Night, the killer is found because they are overcome in trying to ‘make themselves felt’, and in the end they are caught when retribution overtakes the redresser; the killer goes too far.

Therefore It Walks By Night is homage in meaning, motive and setting which shows that Carr saw Poe in some way a founding father for the type of work he wanted to create, and would go on to create. I found out recently that Carr even produced a radio show on the work of Poe work for the BBC. ‘New Judgement’ John Dickson Carr on Edgar Allen Poe was broadcast on 22 May, 1944 at 22:05 on the BBC Home Service. I’m trying to track a copy of this down, so I’ll keep you up to date with that!

This is the first in a series exploring the best design in crime and detective novels, starting with an absolute icon, the Marber Grid.

As an artist myself and being married to a graphic designer I am always drawn to a book by its cover, and classic crime is no exception. The green hue of the vintage penguin crime paperback always brings a joy to the heart. But one format in particular stands apart as being one of the most influential and beautiful layout designs of all time.

The Marber grid was designed by Romek Marber in 1961, after Penguin Art Director Germano Facetti commissioned three designers to devise a new grid system to allow for illustrations alongside the bold typography associated with Penguin covers. Marber’s grid was chosen and he went on to illustrate around 70 titles for the Penguin Crime series. Marber retained the classic penguin green but significantly lightened the shade. The text was cropped at the top, which allowed for a broad section of two thirds of the cover to be used for illustration, something which hadn’t been done before across the Penguin brand.

The designs were provocative and eye catching and even a little unnerving to some, as Phil Banes writes in his book Penguin by Design: ‘The imagery used in the area below was often suggestive rather than literal, but even so, there was some adverse feedback about the ‘darkness’ of some of the images.’

These news covers, with striking imagery at an affordable cost brought high quality art and design into everyone’s home. These illustrations perfectly capture some element of the story or characters, as with one of my favourite designs, the covers for the Father Brown series, which show perfectly how Brown reaches his solutions through intuition and and meditative thinking, rather than through scientific or straight deduction. The design is so classic that in even more contemporary re-releases of Brown this same illustration concept has been retained.

It was later decided that recurring series works should have a recognisable recurring image, as with the covers for Dorothy L Sayers releases, which contained a hand cut white figure placed somewhere on each design.

The Marber grid continued from here to influence every part of Penguins design output, as The Book Design Blog writes: ‘Facetti was so inspired by Marber’s design that he also used it for Penguin’s fiction range, and would later apply it again, practically unchanged, to the blue Pelican books. Eventually Marber’s layout became the standard layout for the entire range of Penguin paperbacks.’ 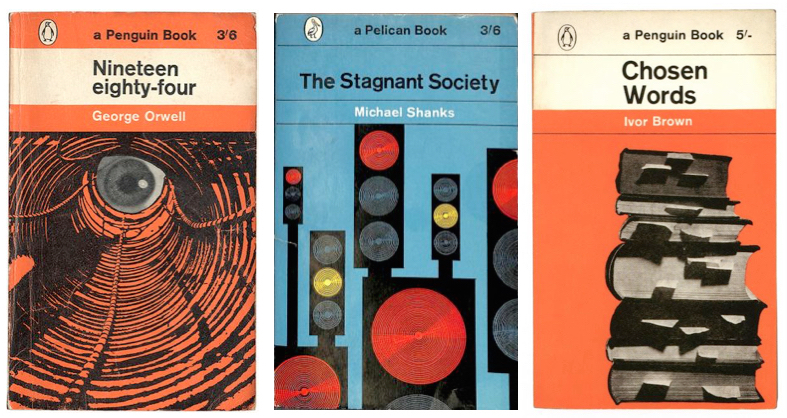 Marber’s own story is a fascinating one. Born in Poland in 1925, he escaped the Nazi death camps with the help of Sergeant Kurzbach, who helped saved large numbers of Jew’s during WWII. Arriving in Britain in 1946 he enrolled at St Martin’s school of art (a member now of the UAL group of universities, where I also currently study), to study commercial art. He then went on to attend the Royal College of Art in 1953. Marber then designed a number of covers for the economist. These bold typographic designs were noticed by Germano Facetti who then asked him to work on some Penguin titles, which lead to the commission of the Marber Grid. 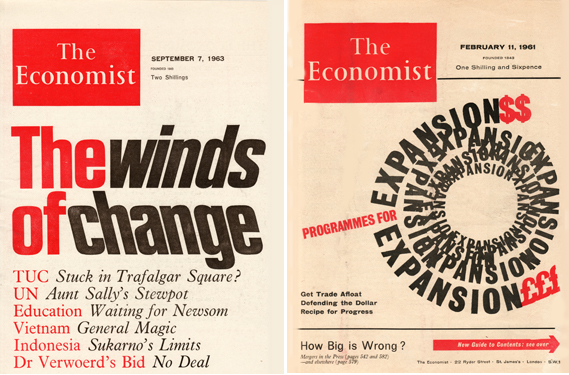 Marber is still alive and retired from the design world, holding a place as Professor Emeritus with Middlesex University. Designers today still look back to this iconic grid and its influence on cover design the world over. I think it’s also helpful in our current climate to think that a Polish immigrant to the UK who lived through Nazi occupation, changed the face of crime and book cover design the world over.