In my last post I gave a list of 5 brilliant locked room mysteries from the golden age of crime fiction, or written in the golden age mould, that work as for runners to the ‘thriller’ genre. Page turning mysteries that never hold up on the pace. 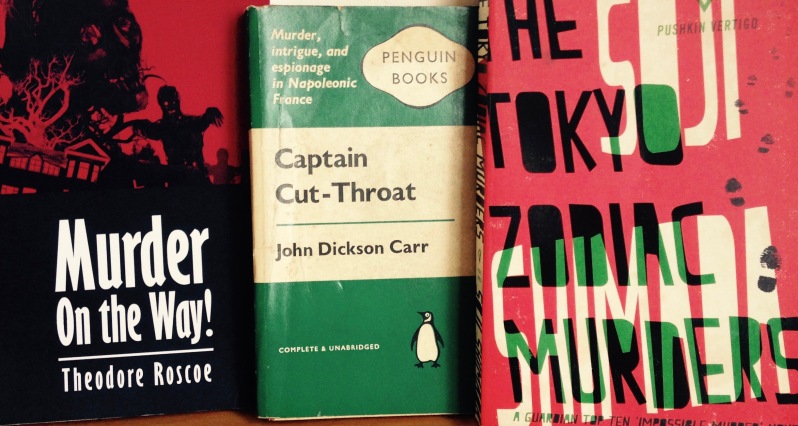 But as with all lists picking out just 5 was too difficult, and so many great books got missed out. So I thought why miss out, let’s do some more! So here are another 5 thrilling, high paced, page turning impossible crime works, to add to your list:

Published originally as a serial under the title ‘The Grave Must Be Deep’ this is an absolutely rip-roaring mélange of impossible madness. Locked room shootings, lead to hovering guns, lead to impossible vanishings, lead to being buried alive, lead to a woman impossibly healed after being shot in the head, and that’s just a small selection of the book’s mysteries. Constant threat and a brilliant ticking-clock-set-up give this book it’s furious pace, and the maddening claustrophobia of being stuck in one house on one island (pre-Agatha Christie) make this into a perfect example of an early thriller. It is also a book of firsts: set in Haiti it must be one of the earliest golden age crime novels to have a totally mixed race cast, with most of the main characters being black, it is also one of the very first Zombie novels – not the kind of Zombie we know today, but in it’s original Haitian origins – and it opens with the phrase ‘funny queer not funny ha-ha’ which is original to Roscoe, and which thanks to him is now an everyday part of the English language. This book will be the subject matter of our next Men Who Explain Miracles podcast as my fellow podcaster and blogger JJ went on an amazing journey himself getting this book pack into publication.

Set in 1805, during the assault by Napoleon on Britain, this is a stand alone Carr and is part impossible crime work, part spy novel and part historical thriller. A silent, invisible killer known as ‘Captain Cut-Throat’, with the ability to to kill without being seen is knifing sentries in the Napoleon’s vast battle-camp poised to sail on England.

Not being hugely drawn to historical works per-se I was totally surprised by this book. The natural flow of the narrative, and the tension built by Carr with every plot point meant that I couldn’t put it down. The impossible angle is played down but gives rise to everything that follows and creates terror among the sentries that makes for a brilliant sense of hysteria throughout. There are some of the best written scenes in any Carr book here, just for the their sheer pace and the depth of the contextual framework.

I am honestly trying not to have majority Carr works here, but he has so many good examples what can I say? He isn’t called the master of the locked room for nothing. The Judas Window is hailed as one of Carr’s best, and there is very good reason for that. I also think it’s another of his most thrilling. James Answell arranges to visit his future father-in-law, Avory Hume, at his London home. Hume pours drinks for the both of them in his strong room, fitted with metal shutters on the windows and a huge wooden door with sliding bolts. But after a few sips Answell begins to lose consciousness, finally passing out, his drink being drugged. When he wakes Hume is dead, stabbed with an trophy arrow taken from the back wall. Only Answell and Hume are in the room, and only Answell’s finger prints are on the arrow, all the windows and doors being locked from the inside. Answell says he is innocent and the only one who believes him is the magnanimous Sir Henry Merrivale.

The reason I add this one to the list is for the peril in which Answell finds himself, with the ticking clock of his arrest and impending trial in court, the closing chapters of which have to be one of the best and most fast paced court room drama’s there are. I was literally racing to the end to finish it on my first read.

Another master work from the land of the rising sun. A harrowing prologue sets the pace for a number of brilliant impossible crimes. Painter, serial womaniser and astrological obsessive Heikichi Umezawa is found dead in his studio, locked from the inside. Only his footprints are in the snow leading up to the door and he has a head wound inflicted by an object that is nowhere to be found. Upon his death his studio is searched and a manuscript is found containing an elaborate horrific plan for Umezawa to create the perfect woman, known to him as ‘Azoth’. He would create this woman by killing his daughters and step daughters, recomposing them. And you can see what’s coming next, even though he is now dead, his plan somehow begins to be carried out, and his daughters begin to go missing. Multiple modernist breakdowns and challenges to the reader are all the more maddening, but what makes me add this book to this list particularly is the use of horror to drive the plot. There are twisting moments that rely on some pretty chilling ideas to work, not used for the sake of making something horrific for shock value, but written as a natural development to all that has happened, and therefore all the more powerful.

One of the first locked room mysteries proper, and a very early example of what are now considered both locked room and thriller staples. Mrs Drabdump, owner of a working class, east end boarding house pounds on the door of one of her lodgers, who unusually hasn’t risen from bed. The door locked on the inside she begins to be worried and calls in the expertise of her neighbour, the retired detective Mr George Grodman. Breaking down the door they find the young lodger dead in his bed, throat cut from ear to ear, all windows locked from the inside and no weapon to be found. This book is marvellously written and is a pitch perfect satire of class culture and the East End of London in the late 1800’s, from a man who lived and worked there, and was one of the first books to bring humour into a story of murder. This in many ways was born from the ‘sensation’ literature of the victorian era, but with fast paced, dark twists.

What makes this one a thriller in my opinion is the pitting of the old detective George Grodman against the young gun on the scene Edward Wimp, both of whom detest each other, battling it out with old and new methods of detection. The race to finish line becomes wild as the public outcry for justice builds, with crowds and riots in the street. The last few chapters, and indeed the last few lines are as thrilling as they come. The solution to the locked room was the first of it’s kind and has been imitated no end since.

Well I couldn’t just do 5 could I? Killers Wedge sees Detective Steve Corella, out on the case of a creepy locked room murder. Back at the station Virginia Dodge walks into the 87th Precinct with a gun and a bottle of Nitroglycerin. One shot into the bottle, or one knock onto the floor is enough to blow the whole block sky high. Dodge plans to kill Corella, and stating that no one can come or go until he arrives she takes the entire station hostage. Taking a seat in the centre of the room, the bottle sits perilously on the edge of the table, and with no way of communicating with Corella or each other, the remaining officers must work out a way of getting to the bottle before Dodge can use it. The suspense is nail biting, and as the heat rises you are flying through the pages to see what happens. A number of perfectly timed phone calls and arrivals in the precinct up the ante all the more.

Why this is not in the main list is for the way the locked room plays into the plot. There was some discussion, between locked room aficionados JJ and TomCat in the comments of my last post, about how much it could be said that the locked room in Killer’s Wedge provides the thrilling element. In the rest of my list the impossible angle is the origin of the thriller narrative, where as here the locked room provides a reason for Corella not to be there but doesn’t necessarily play into the hold up back at the precinct. Having said that the complexity of the locked room, means that Corella doesn’t leave quickly (which you are desperate for him to do), although again this could be any complicated crime to keep him away.

However what I think does make the locked room a thrilling element in this book, is how it works on it’s own merit. What is revealed as the door is broken down stays with you for a long time. Also the solution is one of my favourites, and this book has pride of place in my locked room collection.

So there we have it, another 6 books to fill your shelves with. I do not apologise in anyway for burdening you with for books to add to your list.