Back to Crispin’s ingenious and oft-neglected short stories. Last time I looked at Crispin’s early short works and this week I will look at the collecting in Fen Country, which spans the later period of his writing from 1952-1979.

A tiny acknowledgements page at the back tells us that Fen Country is compiled of three different collections. Firstly, many of the 26 stories on offer are from the period between 1950 and 1955 where Crispin was writing stories for the London Evening Standard (oh, to have this back again!). Two stories are taken from editions of Ellery Queens Mystery magazine, and two are taken from a collection called Winter’s Crimes, a series that I have heard a little about but would appreciate more info from those in the know. The first volume is on sale on ebay currently at £103, so it’s a rarity now?

As with Beware Of The Trains each story takes one simple problem, or one very clever and specific idea and uses that as a fulcrum for the tale. I was told by my good friend JJ of The Invisible Event  said he felt that the stories here in Fen Country didn’t contain as good plotting, but the ideas were amazing. And that is a really good way to describe it. The shockingly rigorous plotting of Beware of the Trains is not at play here, but it seems like Crispin was having a huge amount of fun, and being much bolder in experimenting, with the central concept used for each tale. There is a focus on the modernist, meta experimentations that Crispin was so good at with his novels, but pushing them to the limit. One story plays with the idea that Crispin himself is the main characters, and plays with your expectations in the reader/author relationship. 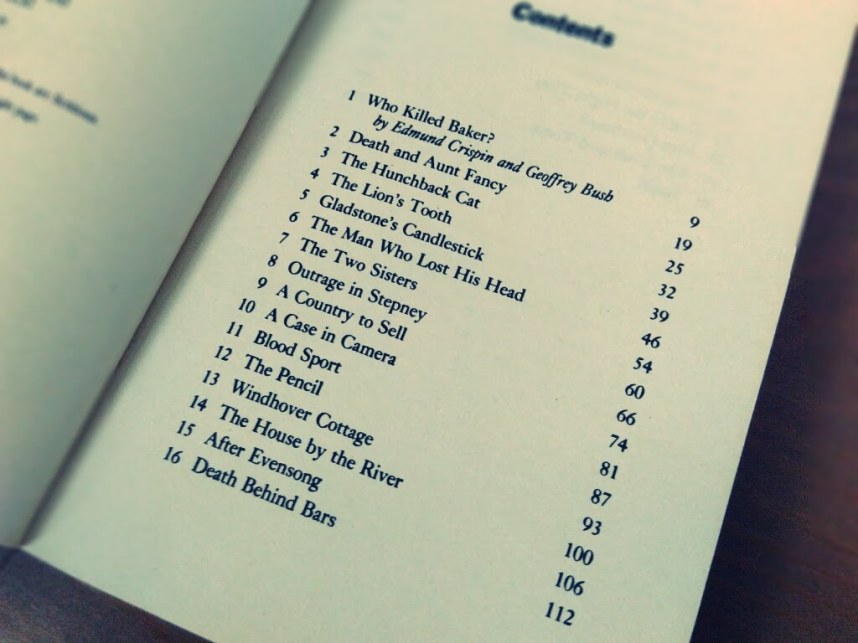 Here are my tops tales from the collection:

Who Killed Baker – (1950)
Simply a genius piece of work. This is the first in the collection and kicks things off so well as it shows where Crispin had got to in terms of manipulating the form and subverting the form. Crispin was clearly having a lot of fun here, and I’m sure this story might ruffle a few feathers. I can’t say too much more but the whole piece revolves around the simple statement ‘Who Killed Baker?’ (Geoffrey Bush?)

The Hunchback Back Cat – (1954)
‘Were ALL superstitious… whether we realise it or not. Let me give you a test’. This is Gervase Fen’s opening gambit in a story that again could have made a full novel with all that is crammed into it. It tells the story of the Copping family, a family who, due to parricidal tendencies and tragedies, there are only two left of. The murder of one of them in a locked tower (very reminiscent in description of the room in Jonathan Creek’s The Grinning Man), leads to a wonderful set of double and triple bluffs that I never saw coming. How the superstitious angle closes the case is extremely clever.

A Case in Camera – (1955)
Detective Inspector Humbleby, Crispin’s series detective inspector in the Gervase Fen stories, is keeping a case open against his superior’s wishes. His intuition has convinced him, for the moment, that the suspects statements are a little too consistent. Their alibi rests on a single photograph which places them elsewhere at the time of a brutal murder. How Fen catches them out is such a lovely idea, and again feels like one of those simple happenings that Crispin saw or experienced in day to day life, and sculpted it to be a tale of crime. This type of writing feels very Carrian, and as I have mentioned elsewhere Crispin was inspired to take up the mystery field after reading Carr. 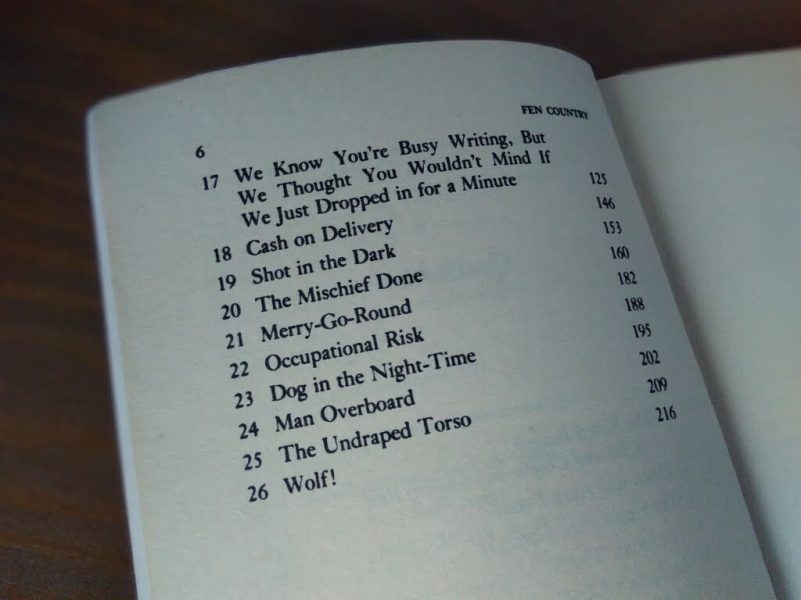 The Pencil – (1953)
When discussing this collection with fellow blogger JJ, this was the story that came to mind for him, and it’s no surprise. Spy thriller in style, The Pencil opens with a contract killer, known only as Elliot, being kidnapped by two assailants, all of which he know would happen and so has planned accordingly.  It has an absolute kicker of an ending and in four pages does more than some novels manage to do!

Death Behind Bars – (1960)
A longer, non series piece, Murder Behind Bars considers how a man being held on suspicion of murder is killed in his locked cell. There is no way of approaching the cell in the time specified, and the murder weapon is no where to be found. Although in ,many ways you can see the solution coming, I really loved it, and it has been used a lot since (and maybe was before). I even saw it in a recent episode of The Dr Blake mysteries even though it wasn’t a locked room scenario. And the motives are especially well spun in this one. But what makes this story even more brilliant is the form that the piece takes, and how that brings everything home to you as the reader, but I’ll let you experience that for yourself.

We Know You’re Busy Writing, But We Thought You Wouldn’t Mind If We Just Dropped in for a Minute – (1969)
A deliciously dark story, clearly based on the frustrations that Crispin experienced being a writer. The setting is a small, isolated cottage in Devon which is exactly where Crispin lived and worked. The story tells us of one Mr Bradley a writer of adventure stories who has a deadline to meet, but keeps receiving endless interruptions of all kinds at his lonely cottage. The characters here are superb, and the way that Bradley desperately tries to remember the line he was writing as he is interrupted is hilarious. The closing line however, is one of the most chilling you’ll read in a short mystery.

Those are my top stories. I highly recommend this collection. Although they are a mixed bag, I think much of this was down to restrictions in time and word count, especially for the Evening Standard pieces. This struggle for deadlines is something that Crispin showed in full in ‘We Know You’re Busy Writing…’, maybe it was a confessional piece of sorts? If you see this on your travels pick it up!

16 thoughts on “The Short Stories of Edmund Crispin – Part 2: The Later Works”