Well this has been a long time coming! This little gem has been burning a hole on my bookshelf since I found this gorgeous, beaten up penguin edition in a second hand bookshop at the beginning of the year. 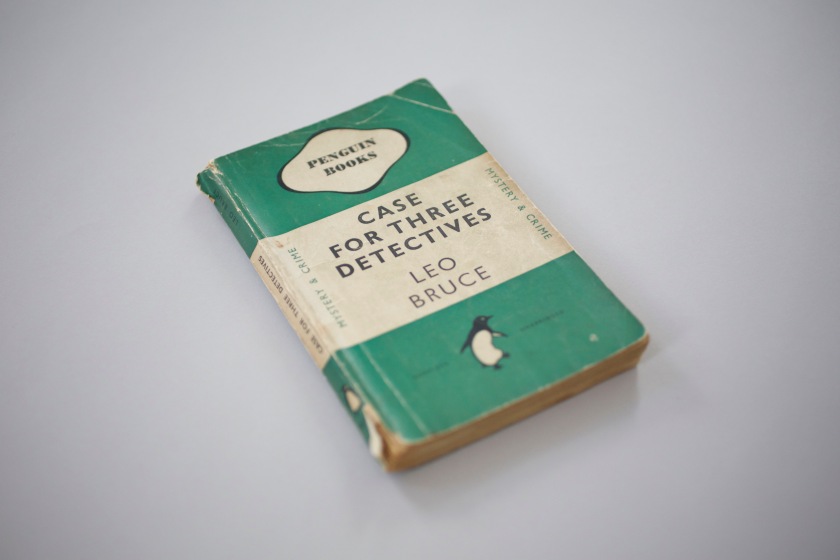 In the most recent episodes of our locked room mysteries podcast The Men Who Explain Miracles, myself and fellow blogger JJ discussed our top 15 locked room novels and Leo Bruce’s Case for Three Detectives this was on JJ’s list. That inspired me to finally get to it and I’ll tell you now that I was not let down one bit. The story:

After a night of hearty food, drink and rather preeminent discussions about committing and solving murder, the ever genteel, and ever rich Mary Thurston leaves her house guests to go to bed. A short times passes and screams are heard coming from her bedroom. Everyone in the house darts to her door from different angles. It is double locked on the inside with two sliding bolts, and once a panel of wood is smashed through the bolts are slid back (by a reliable person I may add) and the crowd rush in. They find a hideous sight of deep, blood soaked pillows and bed sheets, Mary lies with her throat slit. One of the crowd runs to the only other opening in the room, the window, and slides it open. No one to be seen. There are no footprints in the flower bead beneath, the other windows are too far away to climb to, and there was no way that anyone could have got out in time without being witnessed by the others.

In all aspects then, an absolutely classic locked room set up, and this is the point. For the book from here on will be a wonderful comedic parody and critique of classic detective story set ups, their characters and their mechanics.

The theme of parody begins the next day when three investigators, seemingly from nowhere, have appeared in the house. Each of these characters is a larger than life version of a famous fictional detective. Characters that would have been hugely popular and known at the time, even as they are now.

First we meet Lord Simon Plimsol, a parody of Dorothy L. Sayers’ Lord Peter Wimsey. He is stiflingly and hilariously upper class, groaning at beer, sickened by bad decor and having never heard of a strange game called ‘darts’. Secondly we meet the inimitable Monsieur Amer Pecon, which you probably already guessed from the name is our parody of Hercule Poirot, created by Agatha Christie. Amer Picon is an absolutely wonderful name for this character as Amer Picon is the name of a sweet french aperitif, which in many ways sums up Poirot 100%. Picon is uncontrollably french, and wipes off and organises dust at every possible opportunity. Finally we meet Monsignor Smith, a little catholic priest of seemingly no significance. Smith is of course our Father Brown, G.K.Chesterton’s marvellous series creation, and the parody here is wonderful. Smith speaks only in verbose parables and idioms which at times are totally unfathomable. Each sentence is an opportunity for reflection upon humanity and spirituality, and most of the time he seems totally uninterested or is simply asleep during proceedings.

And then of course we have our um… hero, of sorts, the plodding, East Londoner Sergeant Beef. Bain of the local police force, avid darts player and beer drinker, friend to all, but seemingly dunderheaded when it comes to the art of detection.

Once we have met our investigators things start to get very interesting in terms of form. You are aware that with these three famous detectives on the case that you are going to get three different solutions from them. But of course, you are also aware, with the format of the story, and with the presence of Beef from the off, that they are going to be ultimately wrong. Beef says from the first few pages of his appearance that he has already worked it out, but being non charismatic and of the group of simpletons known as the police force, he is constantly told to be quiet or pushed aside.

The fact then that you know that these three detectives are going to be wrong, but not knowing quite how much or why, gives you a very unique, and ‘meta’ reading experience. Instead of trying to keep up in the race with them to the solution, you are instead in a place of critique, trying to see what is incorrect about their deductions rather than what might be leading to the truth. Knowing the end before you start, but not knowing it’s shape puts you in this strange premonitory relationship in regards to the characters. And of course, even though Sergeant Beef keeps getting cut off, when he does get a word in edge ways, it is pregnant with even more significance. But exactly how much people are wrong, and in what way leaves you second guessing yourself.

At the same time, we are aware that we are actually going to get three different solutions from these eccentric investigators, so we are also trying to work out what on earth will be their perspective. And their perspectives in the end are not some weak or comedic piece of detection, but each solution is strong, believable and high quality, and then comes Beef to blow them all away. What is amazing about this is that Bruce had to come up with four different solutions to a locked room problem in one novel, with multiple murderers, motives and clues, all of which were believable and credible. No small task.

But the intelligence of this book doesn’t end here. Not only are the characters parodied, but their detection styles also. Lord Plimsol focuses on details gained through conversation and amiability, Picon looks at ‘matters of the heart’ in his search for truth, and Monsignor Smith ties up his case looking at the spiritual and moral angle.

Bruce then takes this a step further by giving the three detectives solutions that as well as being totally credible and succinct, are parodies of the types of solutions their authors would give them. What really impressed me thinking about the plot at the book’s climax was that Bruce also builds parody into the way that the other characters react to these detectives. Lord Plimsol is deeply admired and respected at all times, Picon draws out everyones emotional secrets and they all confide in him, Smith is ignored and seen as of little consequence until things start to get supernatural. And Beef is seen as the blithering policeman, a classic trope of detective fiction. And Bruce even takes this a step further, in that these parodied responses from the cast are not just a simple send up of the author he is referencing, but they are also pieces of genuine clueing.

How the whole piece rounds up, particularly with Beef’s solution and how he responds to the three other theories is marvellously charming.

My criticisms? When the only strong female character is killed it leaves a super male heavy cast, some of which do blur together because they are so similar. This is frustrating as Bruce was obviously a brilliant writer and creator of character so he could have done a lot more with broadening his cast. But maybe this is parody too? I would also have liked to have seen more of Monsignor Smith. Of course his quiet presence is meant to reflect Father Brown’s, but he is often left a bit till last.

All in all a winner, and I can’t wait to get to the rest of Bruce’s oeuvre.